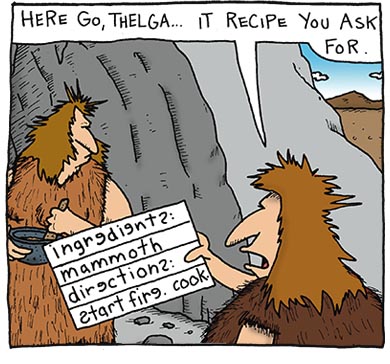 Today’s post contains 3 recipes at the bottom of this email. They are focused on foods I think kids might eat! I could be wrong, but … if I were a kid, I’d eat these and ask for more! We have fun little Pizza Pucks, Burger Balls and finally a Veggie Soup where the veggies have all been cut into fun kid-friendly shapes. Gwyneth would be so proud!

Low-Carbing with a Caveman Twist … for Kids!

Seeing as this is still “family friendly” week, I thought I’d take my absolute best crack at explaining all of this hullabaloo in a manner that kids might understand (not really, but bear with me). It’s really about as good of a distillation of my understanding as I can offer, and put forth in a fun sort of way. Yes, it’s a wild oversimplification and glazes over many important details, but it’s the general gist. It’s the 20% that makes 80% of the difference.

This ecosystem provided nourishing and nutritious foods filled with vitamins and minerals and good quality fats and proteins. This symbiosis worked because pretty much everything ate pretty much everything else in a generally consistent pecking order, with the humans generally at the top. One of the little clues that something was filled with nutrients was … just a little sugar … to make it sweet and to give a small burst of energy when consumed. Humans developed a taste for sweets in accordance with the flora being provided … or … rather … the flora was providing a touch sweet … because the flora knew it was a good way to spread their seeds.

Eventually, the humans got wise and … figured out how to plant the seeds and tend to them … creating an agricultural system allowing for endless renewable food stuffs!

They developed agriculture faster than their human bodies were able to adapt to the change. They discovered they could manipulate the plants, to increase the sweet sensation. They discovered they could dry and refine the plants for longer term storage, more sweet and quicker energy. This resulted in a whole bevy of new products, such as beer and bread!

All the while … the human body … stayed more or less … approximately … the same. The humans had knocked symbiosis all out of whack.

This strong and flexible human body, developed in a world amongst itself … placed itself above itself and allowed for excess … above and beyond what the human body was accustomed to. Silly humans!

See, when the human body is given carbohydrates, it quickly converts them to glucose … where it is burned for energy (thinking, running, breathing, etc.). Whatever isn’t needed right away (today, there is not a lot of running to do) … the pancreas kicks out an appropriate amount of insulin, which runs around taking the excess glucose and shoving it into your jiggly rear, hips and gut … where it’s stored for future energy. In the time before time, this was useful for times like winter, when a very slightly jiggly rump meant a little extra energy during the occasional chase or be chased!

This insulin-glucose system worked really well and allowed for all kinds of variables within the ecosystem at the time … before time. Today, the human body is SURROUNDED with carbs and … more carbs and … then more carbs! The pancreas throws out insulin, where the energy is saved for later, but … while this sugar dance is playing out … more carbs are ingested! The pancreas throws out more insulin! Then … this all stops, but the blood is now filled with insulin, frantically doing its best to handle the situation. With no new carbs coming in … all the sugar is taken from the blood … and stored. Now, there’s no more sugar in the blood. Poor human! You’re tired. You’re listless and … probably feeling a little depressed. Something sweet will cure that!

See, in the time before time, the fruits in the trees didn’t have as much sugar. They weren’t stripped of their skins and their shells and their fibers. These things all work in concert to keep the show going! Without these things … the pancreas freaks out and dies or … the body resists the efforts of the insulin, causing diseases like diabetes, as well as metabolic syndrome, liver and heart diseases. Also … obesity (yeppers … you get fat butt!).

Oh … poor humans … what have you done to yourselves?!

Stop it. Eat … like you’re from the ecosystem in which you live. Return to symbiosis with the land and … you’ll live longer, feel better, look younger, feel younger, run further, run faster and … in all likelihood … lose that infernal jiggle. 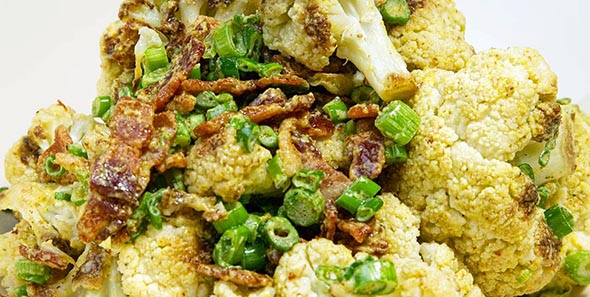 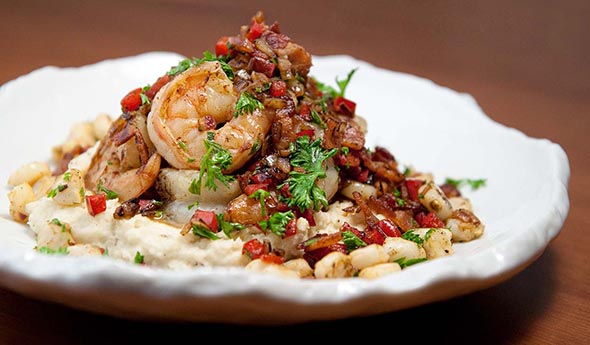 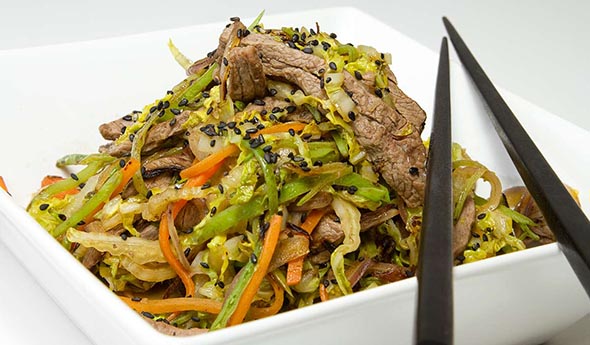 A few months ago, a dude named Jason popped onto my Facebook page doing and saying nice things and participating with people and having fun. Then, maybe two weeks ago, a page named PaleoPot popped in and said nice things about some of my slow cooker recipes (of which I’m generally insecure … weird machines …). He suggested I check out his site, which I did! In fact, I already knew the site because of an egg and sweet potato recipe I’d seen floating out in the Paleosphere.

I just made the connection that Jason and PaleoPot were one and the same, right around the same time I was writing this post, and around the time I’m trying to think of new slow cooker ideas to challenge myself with. It seemed only appropriate to present a few of his AWESOME looking slow cooker recipes. Click the images to see the recipes. They look OUTSTANDING! Thanks, PaleoPot.com for a job well done! 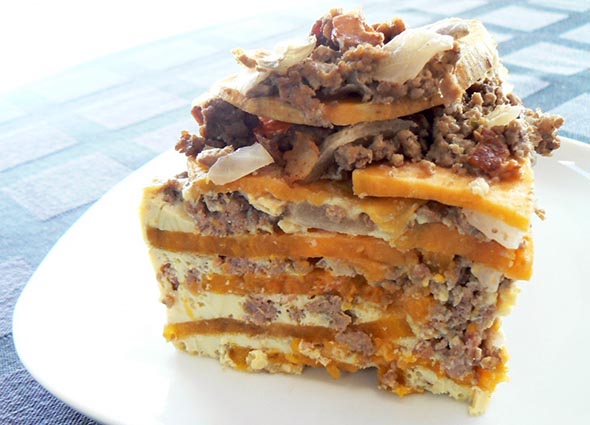 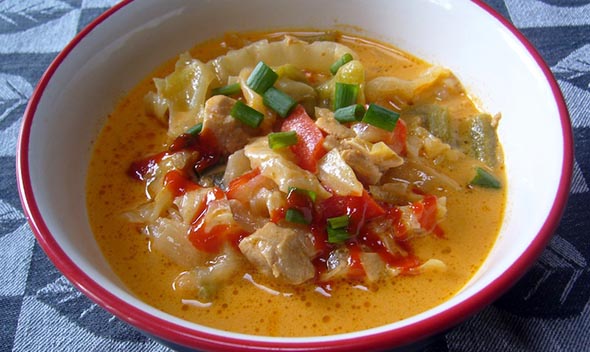 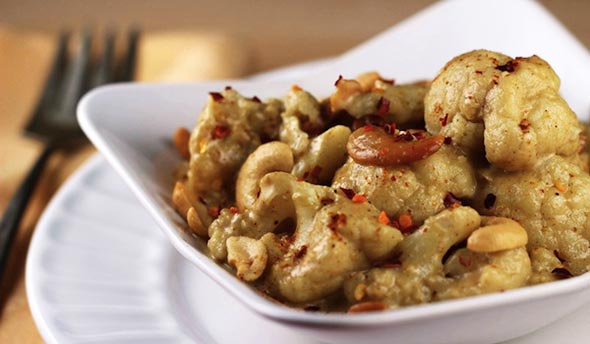 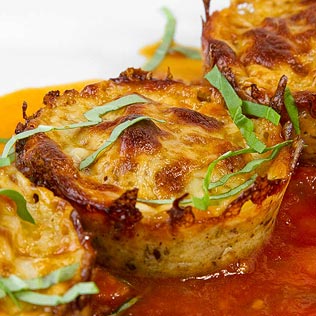 In my pickle of a pursuit for the perfect pizza, I’ve decided to play with a fairly common approach towards low-carb deep dish pizza making. The idea is, in short, to make a thick crust-like creature consisting of cream cheese, cheese and eggs. This is par-baked, then it is topped with pizza toppings, then baked again!

My personal twist is two-fold. One: to use all fresh ingredients. I’m a fan of fresh herbs and garlic, but understand completely why people would use dried and powdered. Use your discretion on this one. Two: somewhere along the line, I developed a habit of baking things into a silicon muffin pan. I “think” it started with frittatas, but it’s evolved into other things … these delightful pizza pucks included!

Obviously, you could use any number of ingredients and toppings, much like as with a regular pizza. I’m going to go with a “meat lovers” variety because … I love meat! Meat is NEAT!

My conclusion? It was VERY good and certainly hit the spot. It tasted like pizza. That is to say, it tasted like pizza TOPPINGS. Imagine ordering a fantastic pizza, with all the stuff you love, then asking for triple exxxtra cheese. When it arrives, pick off only the cheese and toppings and devour with glee. THIS is what this tasted like. In fact, the way they are constructed renders them also “Meat Lovers Pizza Stuffed Cheese”. An excellent flavor, easy and fun to eat, but … not a perfect pizza. My pickle of a pursuit continues … 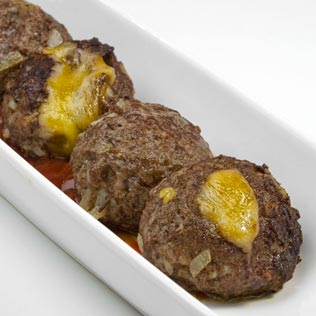 I receive a lot of requests for kid friendly recipes. I think this qualifies! Us adults might even like them!

They’re little more than small bacon cheddar stuffed meatballs, but the overall structure, design and flavor is that of a cheeseburger with bacon. I’ve also got a little bit of caramelized onions and garlic actually mixed into the meat. This is to imply that our burger is also topped with caramelized onions. YUM!

Aside from the fact that these are like small little hamburger bites, there’s also just the nonsensical name. I’m POSITIVE that if “Burger Balls” had been in my mother’s repertoire growing up, that it would become a bit of a weekly backseat chant, between my younger brother and I. 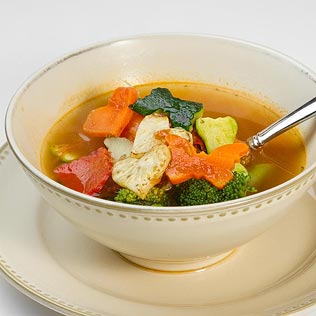 This recipe is long and complicated way for me to say, “Kids like fun shapes!”. While it happens to be a tasty vegetable soup, the main thrust of the recipe is that you can be creative with a knife and various cookie cutters which can be found in many stores, and VERY easily, online. I doubt there are many shapes that exist, which hasn’t been converted to a cookie cutter. For example, here is a link to a page showcasing unusual cookie cutters. Some of the highlights include feet, snowflakes, yoda, ninjas and the font “Helvetica”.

There isn’t much that hasn’t been converted to a cookie cutter. Did you notice that one of them was 3-D? Good times!

Ultimately, there’s a bit of extra time and effort that goes into cutting the shapes out of red bell peppers, thin slices of celery root and zucchini skins, but … if making a wing shaped carrot slice helps convince your kids to eat their veggies, then … perhaps it’s worth it? With any luck, your kids love veggies. If so, they’ll love veggies shaped like a giraffe even more!

Cutting Note: In all cases, I used very thin ingredients, so that they would cook in approximately the same amount of time. I cut the outside layer off of a zucchini, then used cookie cutters on that, for example. For the broccoli, I used the thick “stump”. I peeled off the hard, green and fiberous layer, then sliced the nice green center into thin strips, then used a cookie cutter. For the celery root, I peeled them, then used a flat mandoline to cut thin planks, then used the cookie cutters, etc. The idea is to get a thin “sheet” of something (about 1/4-inch thick), then use a cookie cutter to get the shape. Then, sauté in oil, add to vegetable broth and enjoy!

Waste Note: This recipe has a tendency to make extra waste. You can use the “leftover” parts to make adult soups, vegetable purees, save them for poorly cooked eggs the next day, etc.

Seasoning Note: I kept this simple, because I assume kids like simple. I’d personally toss some capers, olives, fresh tomatoes and some nice fresh herbs into it, as well!