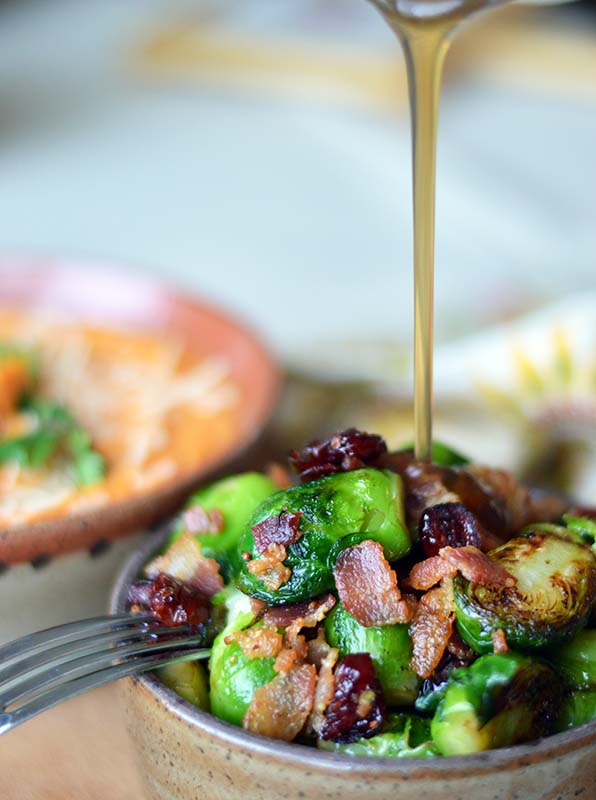 Boy do I wish I remembered where I was when I first enjoyed the source of this recipe. I want to say it was at kind of funky rustic farm to table joint that I checked out on a drive through Chicago, but I really don’t recall. The original recipe was actually quite a bit simpler than this. It was just roasted brussels sprouts and bacon, with maple syrup. Nada mas.

I remember that I was trying to behave. The idea of brussels sprouts and bacon sounded ideal. Maple syrup, I rationalized, is ok within the primal ideology (slippery slope). However, I also remembered thinking that brussels sprouts and pancake syrup seemed like a strange combination. But then the strong magnetic pull of the bacon convinced me to order it, anyway.

I remember the dish came served in a small screaming hot cast iron skillet, sitting on a dark and scarred old wooden trivet. It was all hot and smoky, with a strong bacon aroma. As the server set it down, she raised an opaque glass sauce boat and poured high grade maple syrup all over the pan. Like a good fajita, the sprouts steamed and gurgled with glee. “What a fascinating and weird way to serve brussels sprouts!” I thought.

I was shocked that the bitter-sweet brussels sprouts were so well complimented by the maple. It was a clear match made in heaven. The bacon acting as the officiant!

I’ve never forgotten that dish. I wish I could remember where it was, so I could give them credit. I mean, it’s not a complicated dish, but… my taste buds and olfactory nerves turn to pudding when I think about it.

This recipe? This is the same thing, more or less. Same flavors, a better blanching and season approach, but basically the same concept.

Then, I threw some celebratory dried cranberries in there. Tis the season! 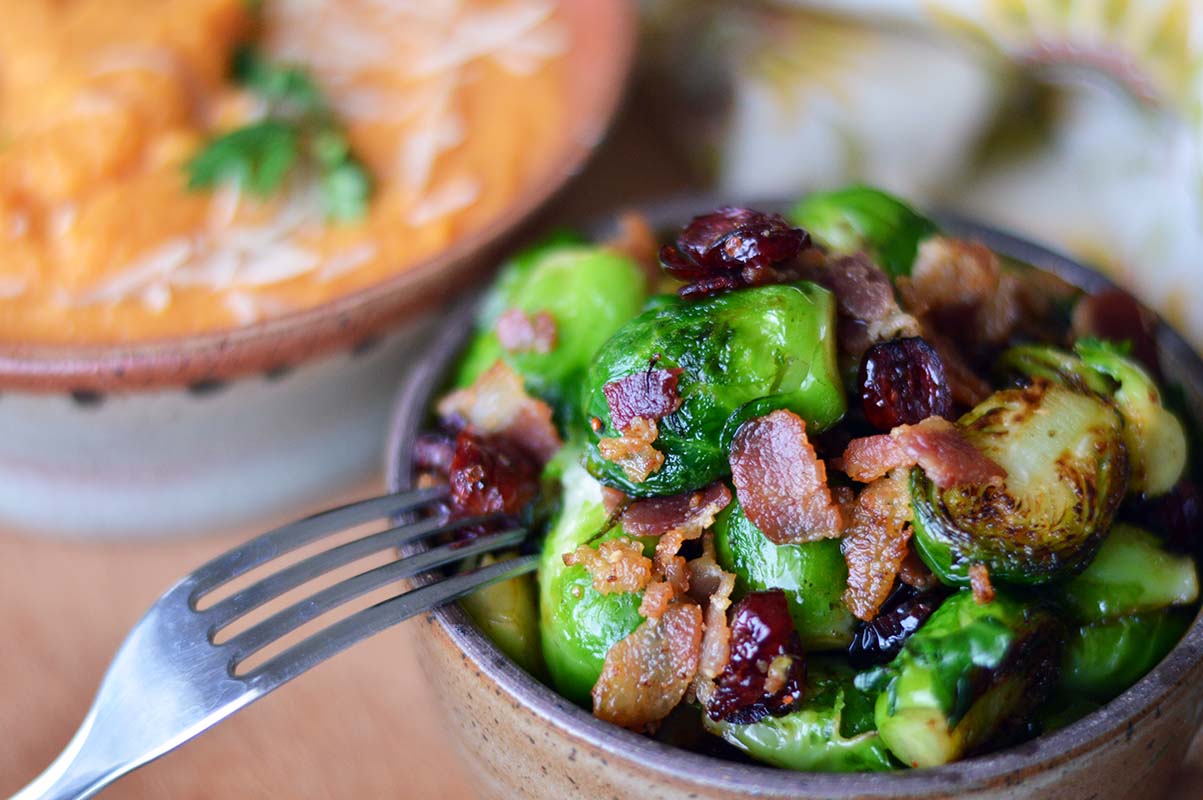 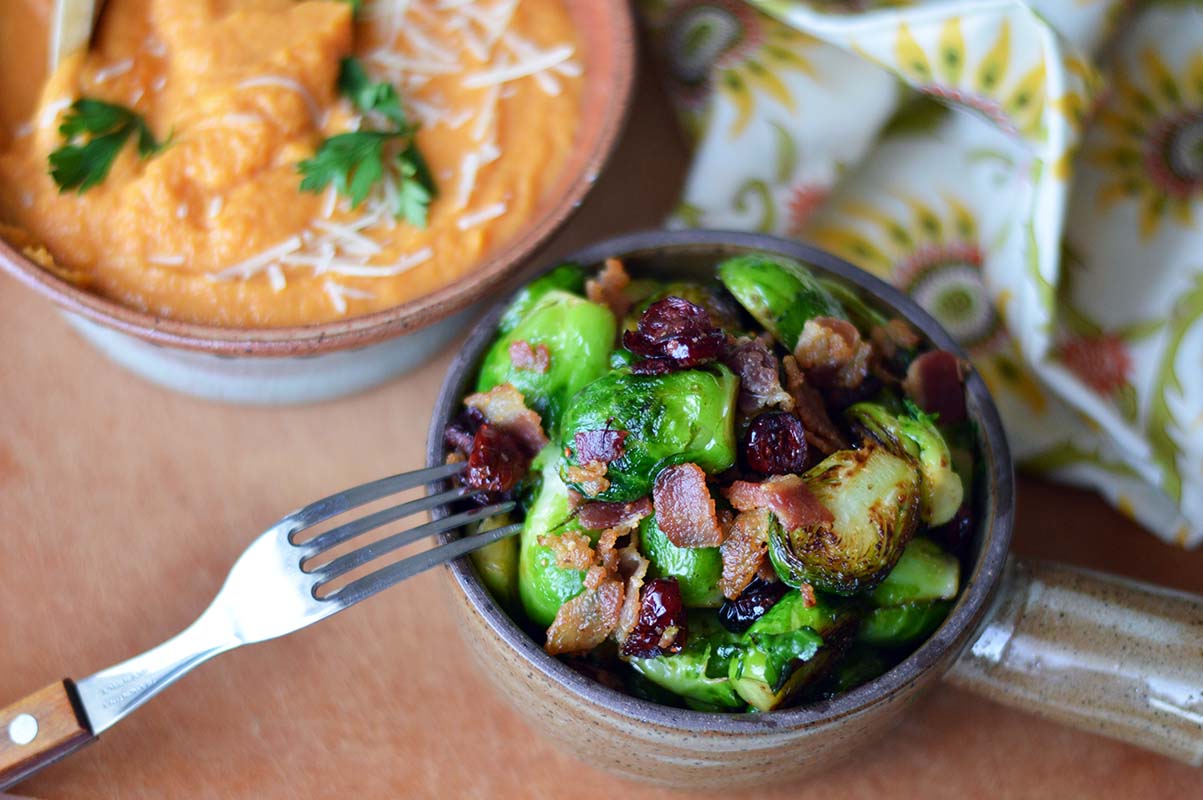 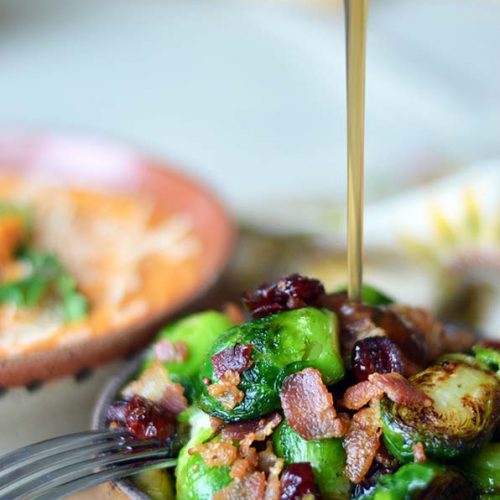 2 thoughts on “Pan-Seared Brussels Sprouts with Cranberries, Bacon and Maple”