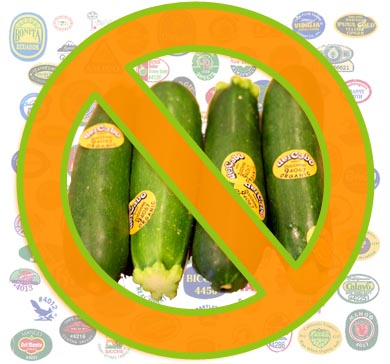 As some of you may know, I’m taking a food writing course, at a local university. This here blog is important to me. I’m working hard to make it a good one!

As I promised, here’s some homework! YAY! HOMEWORK!!!

(It feels pretty weird to be deep into my 30’s and have homework.)

The assignment was: write 5 sentences, beginning with the words, “As I pushed my grocery cart through the produce section, I spied …”. It’s intended to force some creativity. The exercise felt like one designed to help blast past a painful bout of writer’s block. I was supposed to write about the first thing that came to mind, and write it quickly!

Down in Mexico, I befriended some folks working for a big collection of organic farms. They work with farmers all up and down Baja California Sur (and other locations). They send the produce up north where it’s imported into the US, finally landing in some of the best grocery stores! For me, it was always a bit amusing, because I was friends with many people in this company, have visited some of their farms (including a really interesting one, where they test interesting aspect of tomatoes) and listened to many chats about what a wonderful organization it is! Here’s the funny part: as much as this company was a part of my world, you couldn’t actually PURCHASE their products in Mexico. They were all sent up north!

Now that I’m in Seattle, I see their produce EVERYWHERE! It’s an endless reminder of my friends down south. It’s safe to say that I’ve become a big fan of their products and purchase them quite often. I’m now a customer!

This brings me full circle back to my homework assignment. I do not like stickers on produce. In fact, I hate them. I had just made Zoodles with zucchini purchased from my friends. The zucchini had those infernal stickers on it. I tried to peel it off, but … the sticker tore, leaving half paper and half gummy residue. My shoulders sank. Stupid stickers. I grabbed my paring knife and cut out the evil.

I was going to call and complain to my friends’ company (jokingly), acting like an irate customer. Instead … I’m using it as blog and homework fodder.

Here’s what I wrote:

“As I pushed my grocery cart through the produce section, I spied a proliferation of stickers on produce. I understand the desire to want to promote one’s company or farm and to have that expensive logo stare back at me from my fruit basket and crisper drawer. I do, but isn’t there a way that doesn’t involve stubborn gummy adhesives? Everywhere I looked, I counted sticker after brightly colored sticker, often multiple per zucchini due to the merged farms that haven’t unified a sticker strategy, or more likely a gung-ho sticker stickerer. Please Gods of Agriculture, find a way to promote your name that doesn’t require a paring knife to remove! Perhaps the produce scale could intelligently sing your company jingle, sinking that branded diddy deep into your psyche.”

This must have been liked, as it was read in front of the class. Got a lot of laughs! I think it’s silly and poorly written, but I guess it’s kinda cute.

Speaking of my friends, I’m actually going to be meeting some of them, this weekend. They are flying up to attend an organic conference in Portland, OR. I’m going drive down to join them. I’m really looking forward to seeing what’s on the cutting edge of organic farming! I’ll take lots of pictures!

(If I were more prepared, I’d wear a T-Shirt declaring the ban of stickers on produce, suggesting instead … musical scales!)

I just hope my friends don’t want to kill me when they read this … and bury me deep in a hot pile of compost. I didn’t name names, John! I didn’t! 😉 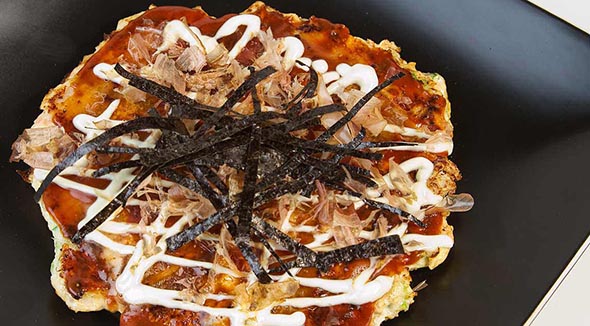 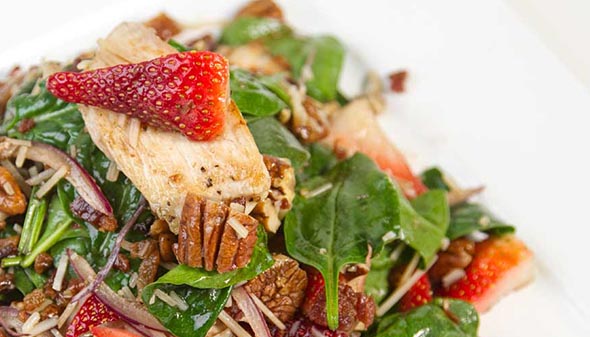 Today’s Recipes are a bit strange. 2 primarily come out of a bottle and one was a total kitchen disaster. The brownies were terrible!

I have a lot to say about the other two recipes, actually. I’ll pick this up in about 2 weeks … after I get back from Portland and after Valentines. It’s a mouthful!

See you Monday or Tuesday for a big Valentine’s Special! 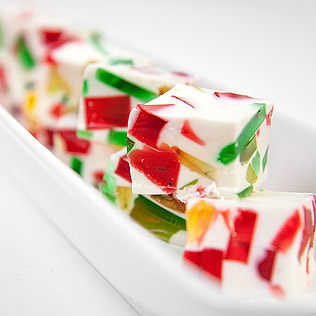 I’m sorry, but I was just giggling like a fool, all day long. This dessert is just silly. It’s DELICIOUS and fun to look at, but … it’s just an absurd dish, albeit an induction friendly one. It’s a jiggley confetti delight!

There’s no real end to what can be done with this. It’s literally just different colors and flavors of jello, which have been made, then cut and placed into a different mold, where a blend of gelatinous sweetened cream is poured and hardened. This holds everything in place, where it is cut again! These new incisions show the cross sections of the multiple colors intersecting and intertwining with one another.

This is a simple dessert that only requires a little time and patience. It is unquestionably fun!

Note: Any flavor combination can be used for this (I used lemon, lime and strawberry). This is more about the method than the ingredients. I plan to really have some fun with these ideas and will come back with an even more outlandish version of this dessert! 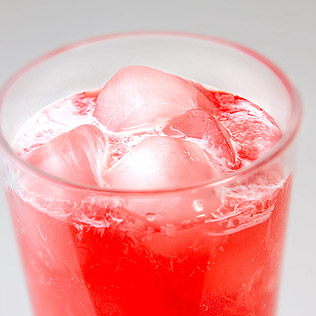 This is a simple and straightforward recipe, but it started life as something else entirely!

My original idea had been to recreate a true “sugar-free” (to the degree it COULD BE true) Egg Cream, like the old soda fountains would have made. I’m often drawn to these kinds of recipes, as they’ve got history and a bit of fun thrown in. In addition to the age of an egg cream, is the simple fact that it contains neither eggs, nor cream! I made my own chocolate syrup, and used almond milk and club soda. I tried to get it to foam, and tried to shake two glasses together (like a shaken martini), this ended explosively. After a big blotting session, I decided to give up and throw in the dirty towel.

Because I needed a 7th dessert for “dessert week” and wanted it to be a beverage and had to use ingredients that I had on-hand … I thought of the “Italian Soda” idea!

Italian Sodas have their roots in the US, not Italy. However, the legend has it that the Italian Soda was started by “Torani” in the mid 1920’s. Rinaldo and Ezilda Torre used the family’s Italian recipes to develop their flavored syrups. Using these syrups, they would flavor sparkling water and market the “Italian Soda” to neighborhood cafes in the North Beach area of San Francisco. The rest, as they say, is history!

I’m not going to sugar coat this one, my friends. These brownies sucked. What follows is intended to provide a chuckle, perhaps with a very mild point (but probably not).

I knew I had a full day of making all desserts, all day. So, I invited several people over, to help me consume all the tasty treats. These brownies sat quiet and alone, while the rest of the mouthwatering goodies were devoured. These brownies looked good! They definitely appeared delicious. The batter was AMAZING. If you ever need a sugar free, all natural brownie batter fix … this is the way to go. This brownie batter was phenomenal! When I put the spoon in my mouth, I was transported to that place children go when their mother hands them the gooey whisk full of cookie batter, right as the rest of the cookies go in the oven. My eyes rolled back into my head and I was a 7 year old boy, completely thrilled with my batter. I had no doubt that these brownies would win awards.

The batter, my compadres, was a lie. A facade!

There are many competencies that I have. I can dream all sorts of flavorful and interesting dishes in my mind, simply by combining a variety of flavorful ingredients with a blend of interesting cooking techniques. I can almost always kind of totally trust the end result will be to my satisfaction, sort of. On very rare occasions, I stumble and make something less than tasty. More often than not, it’s wonderful and good as, or better than I’d hoped!

Baking, on the other hand, is more about ratios, reactions and science. It’s about leavening power (the “rise”), the order the ingredients are added, the mixing and blending process and the final structural integrity of the ingredients. Baking is a lot of formulas. When the formula is off, the end result is usually way off and cannot be salvaged. A sauce, on the other hand, can be manipulated all day, without much thought of adherence to a strict recipe.

Baking is all about the perfect execution of the formula.

I am a solid baker, when it comes to wheat flours. I understand gluten and how it works. I understand the leavening agents. I understand sugar melting and liquefying within batters, as it baked. I understand all of that. However, in a world without wheat, sugar or gluten … well … all of a sudden … the world has changed. I don’t know which way is up! How do these things work?! What are they supposed to do? Will it deflate? Will it rise? Be chewy? Will it be dry and brittle? Will it absorb moisture? What in heckfire is going on with these things?!

“Why am I even showing this recipe?”, you might ask. Partially, because the batter is so good. Also, to shed a little light on the frustrating transition to a new way of thinking. Some information translates and some, frankly, doesn’t. Finally, I’m also curious if anyone has any insight what went wrong. Why was this a bizarre cardboard brick? It was the strangest texture. Dry, but not totally brittle. Airy, but far from light. Full of chocolate and almond flavor, but somehow incredibly bland, at the same time. I blame the coconut flour, personally.

I can only describe the flavor as … “disappointment”.

Embarrasing Note: After writing this whole diatribe, I just tried to more thoroughly dissect my notes, and I’m 98.6% certain that I misread my own recipe. I think that if I had used 1/4 cup coconut flour and just 1/2 cup of almond flour, that this recipe would’ve been awesome. 3/4 of a cup was the “total” amount of nut flours … not “each”.

3 thoughts on “Stickers on produce and more of the sweet stuff!”