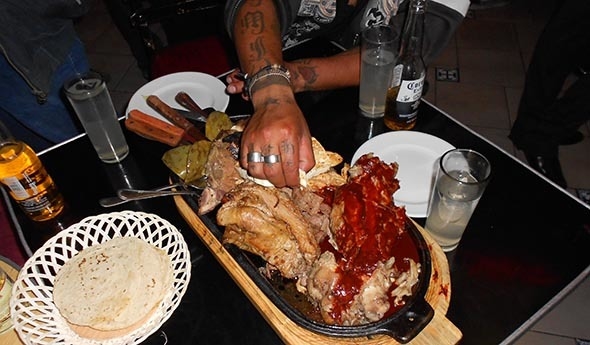 Forgive Me Father, For I Have Sinned

I’m writing this post from Mexico City, where I’ve been staying with the Deschamps family since Friday. In my opinion, anyone named Deschamps is automatically awesome, even if they’re unrelated to this particular Deschamps family. This family makes ALL Deschamps look incredible. Even the French ones!

The other day, Paulina took me to her Aunt’s house (my friend Lulu’s sister). We arrived and were shown to a beautiful pile of pork chops, pork loin, veggies and greens. They’d saved it for me to cook for the whole family. I happily whipped up some tasty food for everyone! 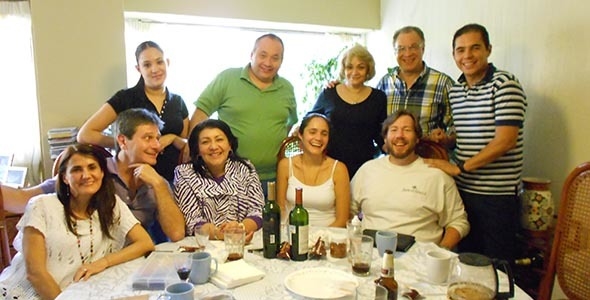 I feel so grateful to this family for taking me in and treating me to a level of hospitality that goes well beyond anything I’ve ever seen from my own culture. It’s endlessly inviting, warm and welcoming. I’m not always verbally graceful with my words, but I can cook. I tend to show my appreciation through food! 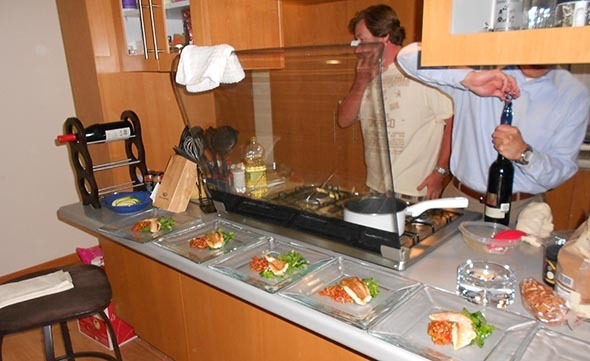 Here’s a shot of me cooking dinner for the couple I’m staying with Natalia and Isaias (Chayo). It’s not the best shot, but you can see the start of some delicious Crispy Skin Red Snapper with Orange-Tomato-Bacon Marmalade and Fresh Herb Salad.

Here we all are about to eat … in front of us was an amazing Artichoke Heart Bisque with Lobster. It was yum! Natalia and Chayo are on the left. I also invited Victor and Leny, as a big thanks for taking me to the pyramids! They didn’t have to go and not only went, but took me to a monastery and bought me lunch! (for those wondering when I’m going to get a haircut … I just did. I needed it. Whew!)

This trip has been amazing, so far. I really REALLY like Mexico City!

I’ve got a 17th degree sunburn from my day standing atop the Pyramid of the Sun. (note to self: next time you stand on a Pyramid named for the Sun … wear sun block). I’ve seen an orchestra, I’ve taken a tour bus all over the city. I’ve walked all over various parts of the city, but mostly La Condesa and Coyoacán. I just got back to the apartment after seeing two amazing Jazz bands rattle my mind.

Because I’m on vacation and haven’t had a lot of time to really think about or study any low carb topics, this blog will be … more about travel. We will get back to our regularly scheduled programming within the next week or two (keeping in mind, I’m also in the middle of moving my home across country borders).

Here are some “coming attractions” for recipes that will come within the next month or so. (recipes and nutrition … still in development) 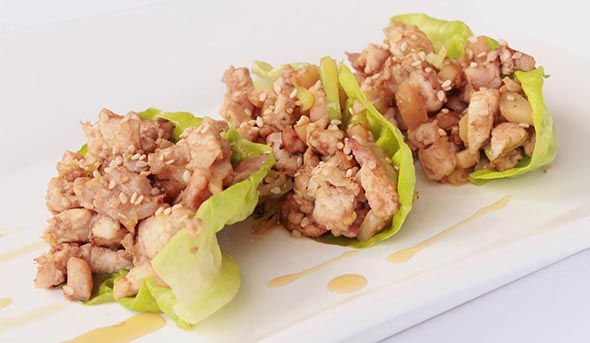 (If there’s anything that I’ve noticed about my way of eating … it involves a lot of soup!)

Regarding food … I tried to stay good and have been “mostly” good. Sure, I’ve absorbed the occasional tortilla, but I’ve avoided all donuts and their variants. One of my favorite beverages on the planet is called “horchata”. It’s a super sweet beverage made from rice and often … nuts. I haven’t ordered any! I’ve been taken to multiple ice cream shops and … have said “No!” each time (I’ve even been saying it in Spanish!). To make a long story short, I’ve been maintaining a restrained eating style, but without feeling like I’ve upset my vacation or been overly weird or strict in front of my hosts (who … again … have been amazing and have gone above and beyond the call of duty, in all possible ways. Thank you, Deschamps. You too, Lulu!)

Finally, I’m a horrible terrible and horrendously awful person and am flaking on my own blog. This week has only 6 recipes. In all the commotion, I’ve only had time to do the nutrition for 6. I’ll throw in a bonus recipe within the next week or two, though. I promise!

I’m only about half way through my trip and have already taken about 1000 photos. These are just a few highlights, and really only from the first half! I imagine that when I get to Seattle, I should probably compile a big trip photo spread with anecdotes and the occasional random thought. In the meantime … on with the pictures!

There’s an area (Colonia) called Xochimilco. Mexico City is basically built on what was once a lake, 500 years ago. It was originally filled with canals and waterways, but time and change and rendered all these canals extinct. Xochimilco is one of the last remaining areas with these waterways intact. You can go and rent a boat, with a driver and … spend the day floating around! 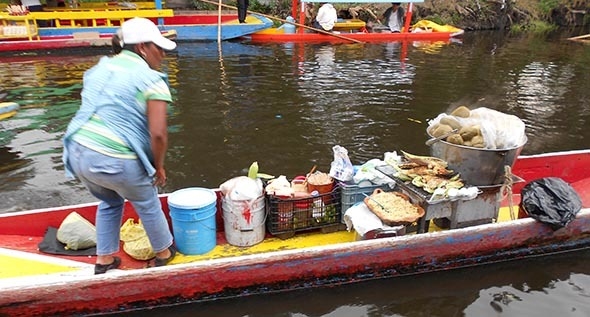 Vendors will bring you all sorts of food, drinks and trinkets. You could literally live on these waterways and never really leave. Eveything is brought to you!

You can even get yourself a mariachi band to pull up and entertain!

Speaking of Mariachi’s … I visited the Mariachi Center of the world, in what may be amongst some of my most surreal conscious moments. Being in Garibaldi Square at 1 AM on a Saturday night is tough to explain. 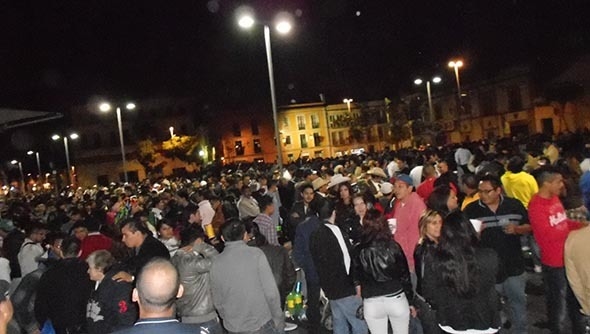 The best I can do is to suggest it’s like being in an unpoliced and rowdy section of Las Vegas, where rules don’t quite mean anything and there are 2000 Elvis Impersonators … all speaking Spanish, and each of them just wants to sing to you and your friends (for a fee, of course). The presence of Mariachi Bands is ubiquitous. Each and every one of them is vying for your attention. It’s a strange feeling. 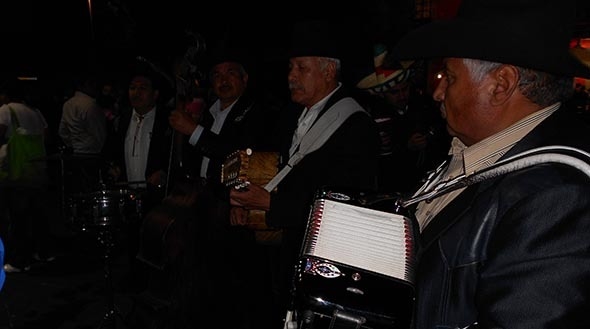 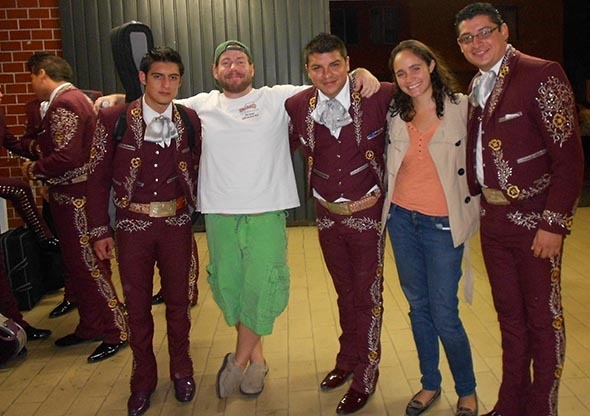 I have a video of the Square, which is really pretty amazing to see!

We went into a famous restaurant (I think it’s called “El Tenampa“). It was featured in many movies from Mexican Cinema, back in the day. It was quite a place! It felt like being in the old old west, with the old bar, a lively atmosphere and Mariachi bands playing at just about every table.

At one point, I noticed this mound of what looked like soft roasted animal meat, with bones, melted cheese and sauce. It was a ginomous carnal platter and … I wanted a picture of it. However, it went to the table of 3 HIGHLY intoxicated men. Being the timid and out-of-place foreigner that I was, I remarked to Paulina how I’d love to get a photo of that mound of protein, but … wasn’t sure how the pile’s owners would react. Paulina snatched the camera, ran over and took this photo. Of all the photos in my camera, this one is my favorite. I still don’t know what kind of animal that was!

Here are some photos of the city center. I’d write more, but … it’s late and I’ve got a big date with the Museum of Anthropology in the morning! I will write more about all of this, plus LOTS more, in the near future! 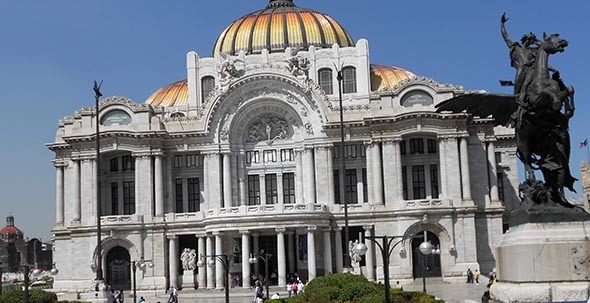 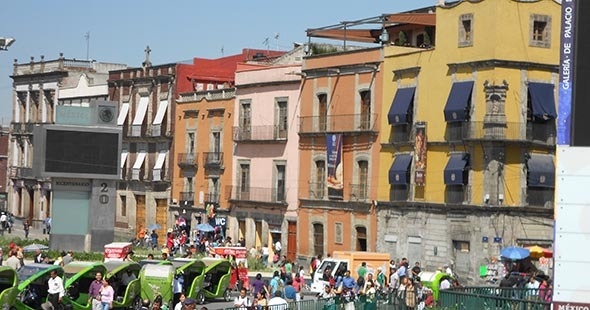 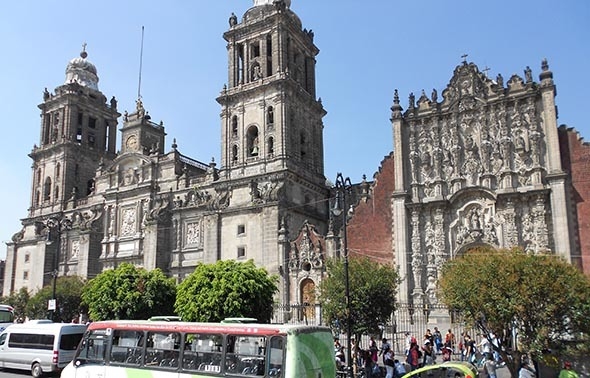 There is SO much I’m leaving out of these photos. This last 5 days have just been amazing. The rich culture, family hospitality, city life, and the history of the area is spellbinding. Without showing the photos of the various Colonias and getting deeper into my experience, the following brief statements will hopefully suffice … Mexico City is amazing. I’ve never been anywhere like it. 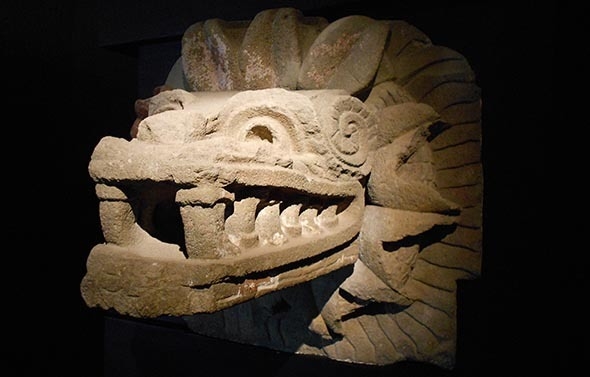 … sticking out of the side of a pyramid … 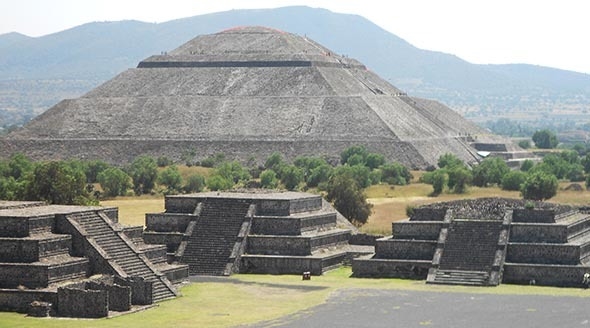 Again … much more to come, including monasteries, photos of various towns, food I’ve eaten, outdoor markets and so much more!

This week, I have 2 soups. I love soup! Soup is a great way to blend everything together, without needing something like “bread” to hold it all together! Speaking of which … I’ve also got a sort of … “French Toast Sandwich” called a Monte Cristo. It’s AWESOME! There’s also a bread pudding, which is one of my rare desserts. This is served with a sugar free Crème Anglais … which can also be made into ice cream (which … in a way could be seen as the mysterious 7th recipe).

I have barely had time to check email this week, but have noticed many comments in both my website under various recipes and blog posts, as well as within Facebook. I have not been able to respond to these, but I will when I return. I’m sorry for anyone that’s been waiting for me!

In other news, I saw that LowCarbZen gave me a big thumbs up. THANK YOU!!! Whenever you need anything from me … you know where to find me! To anyone that doesn’t know LowCarbZen, check out the LowCarbZen Facebook Page or the website. Great stuff and even better people!

Just in awe of Mexico City …